The Cathédrale Notre-Dame makes a grand first impression. From its splendid location on the Ile-de-la-Cité, the cathedral's towers, spire, and flying buttresses seem to magically spring forth from the Seine River and soar ambitiously towards heaven. The 70-meter-high cathedral was, for centuries, the tallest building in France. 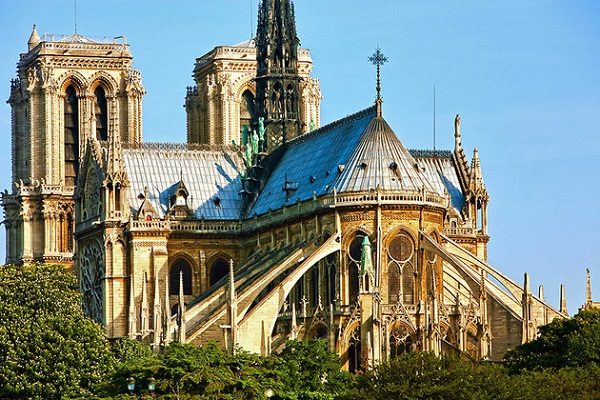 A masterpiece of French Gothic architecture, the Notre-Dame is one of the greatest monuments of the Middle Ages. Although it may look archaic when compared with modern landmarks like the Eiffel Tower, the cathedral features a revolutionary medieval design. The innovative Gothic technology of "flying buttresses" (support beams) were used to reinforce the massive structure.
The Notre-Dame Cathedral was founded in 1163 by King Louis IX (Saint Louis) and Bishop Maurice de Sully, who wanted to build a church that rivaled the Basilique Saint-Denis. It took almost 200 years and countless architects, carpenters, and stonecutters to construct the Notre-Dame Cathedral. The result is a perfection of Gothic design. Visitors marvel over the fabulously detailed facade and are awestruck by the enormous nave. The serene sanctuary is a soul-inspiring space. Ethereal light filters through magnificent stained-glass windows, and in the evening, the illuminated votive candles add to the spiritual ambience.

In the 13th century, flying buttresses were a revolutionary new technology of Gothic architecture, an innovative solution to provide reinforcement for heavy cathedral walls. The flying buttresses support the structure and prevent it from collapsing despite its enormous weight. On the Notre-Dame Cathedral, the flying buttresses are seen on the east facade (rear) of the building. These 15-meter arched pillars resemble long, spindly spider legs bent at the knee, surrounding the building like scaffolding.

Notre-Dame was one of the first medieval cathedrals built with this special architectural technique. The cathedral was not originally designed with flying buttresses when it was constructed in the 12th century. However, stress fractures in the walls called for an architectural solution in the late 13th century. The architect Jean Ravy designed the flying buttresses to support the building from the outside, without obstructing any of the stained-glass windows. Although they are a purely functional structural feature and were not designed to beautify the building, they have a certain harmonious quality.

The cathedral's twin towers are open to the public for visits. The entrance (with admission fee) to the towers is to the left of the front doorways on the Rue du Cloître Notre-Dame, and then there's a climb of 387 steps. Admission allows visitors to see the two towers and the balcony of gargoyles. The famous Bell Tower that Victor Hugo's Quasimodo sounded is the North Tower. Visitors can see the cathedral's largest bell, the Emmanuel Bell, up close. 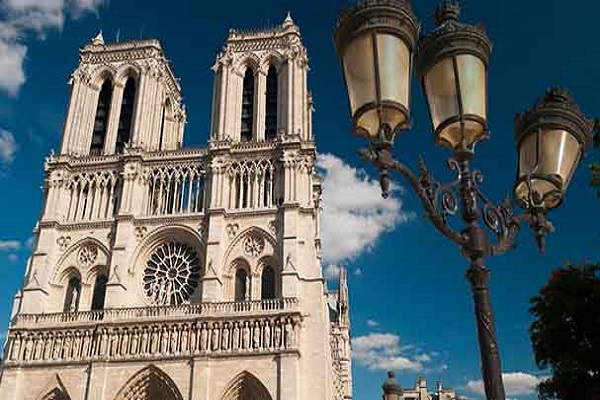 Gargoyles are fearsome sculptures typically found on medieval cathedrals, often designed for use as rain water spouts. Some of the grotesque figures had no functional purpose at all, and many believe that they were created to scare off evil spirits.
The entrance to the towers is to the left of Notre-Dame's front doorways on the Rue du Cloître Notre-Dame.